Sacraments are the sacred acts or ceremonies that we are all to perform as priests. We’ve just seen that the Law’s sacrament of burning incense foreshadowed the call of every believer in Jesus to prayer, and the burnt offerings foreshadowed dedicating ourselves to Jesus, body, soul and spirit. Now we’re going to look at the elements we are to use.

Don’t let yourself be put off by any apparent complexity because, when you blow away the mystical fog and confusion of man-made traditions, the Biblical truths are really quite simple – very profound but remarkably simple.

Overview
Firstly, an overview, most of which you don’t even have to remember to function in your royal priesthood.

Historically the Eastern, pre-Reformation Western, and Roman Catholic churches have practised seven sacraments: baptism, confirmation, the Eucharist or communion, penance, extreme unction, ordination and matrimony. The Reformation Protestants initially limited the sacraments to just two, baptism and the Eucharist or  communion, but later revived different forms of confirmation, unction, ordination and matrimony, bringing them back to six.

There are also widely varying ideas on what is accomplished by sacraments and who is allowed to administer them so, to be obedient to our calling as a royal priesthood, it is essential we are as “noble-minded” as the Berean Jews, i.e. that we listen “with great eagerness” to anyone speaking in the name of the Lord while also “examining the Scriptures daily to see whether these things are so”.1

We won’t cover ordination or matrimony here because most of us won’t be ordaining or marrying people. Suffice it to say, Biblically there were four literal or physical sacraments administered by any saint in the Early Church, using bread and wine, water, oil, and our own hands, and it’s these we need to clearly establish and understand for ourselves so we can do them.

As for sacramental priestly robes, the Levitical priesthood had to wear special garments when they were working,2 and some churches today think they still should, but the royal priesthood that Jesus introduced doesn’t – He didn’t wear any special garments. Think of Him at the first “communion service”, the Last Supper. The only special robes He wore was when the soldiers dressed Him up to mock Him3 and His own garments which He wore day to day were shared out among the Roman soldiers who crucified Him.4 He also told the Twelve not to take even a spare coat when He sent them out to minister.5

Accordingly, we don’t have to wear special robes either. The linen garments of the Levitical priests were only foreshadows of the spiritual reality Jesus brought to us6 and the “fine linen, bright and clean” that we are to wear is instead to be “the righteous acts of the saints”.7

Before we look at these four sacraments, let us be very clear as to what the Scriptures say we will be achieving.

What Isn’t Accomplished by Sacraments
The most common misunderstanding of the sacraments in every age is “sacramental grace”, i.e. the belief that we receive grace, God’s favour, through them. While this may seem a harmless thought, if left like a fly in the fragrant anointing oil,8 it actually pollutes everything, leading into contradictions of major Biblical doctrines.

For example, if grace comes through sacraments, only specially consecrated people can help anyone receive grace. Historically, this assumed privilege has been used to manipulate whole nations in what is called “priestcraft”. Consequently, “theocracy” has gained a bad reputation so, in another article, we will seek to redeem that.

Happily, the only means of grace bypasses all the frailty of mankind and our systems:

For by grace you have been saved through faith; and that not of yourselves, it is the gift of God; not as a result of works, that no one should boast.  For we are His workmanship, created in Christ Jesus for good works, which God prepared beforehand, that we should walk in them.9

God’s gift of grace is not in response to what we do or don’t do, with or without sacraments. It is “not as result of works”.  Instead, He offers His grace to us all. If we hear and trust Him, we now have faith:

Faith comes by hearing, and hearing by the word of God10

As we trust His words, He gives us the grace He promised, i.e. forgiveness. So we receive grace only “through faith” and anyone can speak the word of God and anyone can believe. We are not saved “by” good works but “for good works” – to do them, not because of them.  The sacraments are some of the good works “which God prepared beforehand, that we should walk in them”, our priestly works.

Faith and Baptism
If saving grace is administered through a sacrament, a baby does not need faith to be baptised – just the right ceremony by the right person. Catholic mid-wives used to carry little bottles of holy water to sprinkle on sickly new-borns, in case they died outside of grace. Tragically, many adults today reject the gospel on the grounds that they have no need of it because they were baptised as babies. They ignore the explicit warning of Jesus when He commanded the reconstituted Twelve to:

Go, therefore, into all the world and preach the gospel to all creation. He who has believed and has been baptised shall be saved; but he who has disbelieved shall be condemned.11

Baptism is only for those who have believed the gospel, personally committing themselves after hearing and understanding the message and requirements of Jesus. Since it symbolises our being buried12 after dying to our own ways and desires and to live in His way and as He desires,13 it only makes sense if we know what we are doing. 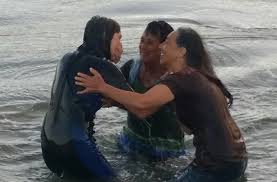 …all those who separated themselves from the peoples of the lands to the law of God, their wives, their sons and daughters, all those who had knowledge and understanding, are joining with their kinsmen, their nobles, and are taking on themselves a curse and an oath to walk in God’s law…14

Baptism is also for those who want to become disciples or life-long students of Jesus so without faith in Him, there’s no point.

Unbaptised, Unsaved?
If saving grace is administered through baptism, baptism becomes essential for salvation, and not being baptised means not receiving grace. This is clearly untrue because Jesus assured the unbaptised and dying thief on the cross beside Him that he would be saved through his last-minute faith in Him.15 There are many fine Christians who have not yet been baptised as believing adults, e.g. in the Salvation Army – their salvation will only be because of their faith in Jesus.

As we saw above, Jesus said:

He who has believed and has been baptised shall be saved; he who has disbelieved shall be condemned.16

It’s not lack of baptism that will condemn us but lack of trusting in Him.

It’s also to be hoped that anyone reading this who has not yet been baptised as a conscious choice will see their lack in this regards and get someone to baptise them as soon as possible.

Sacramental Grace in Communion?
Lastly, the erroneous belief that grace is administered through sacraments is why some churches teach that continually partaking of the Communion, Eucharist, or Mass, is essential for salvation; missing it is thought to be a mortal sin, i.e. not receiving saving grace. This is nonsense. We can partake of a million Masses and not be saved. Jesus warned that no amount or kind of good works will save us:

Not everyone who says to Me, ‘Lord, Lord,’ will enter the kingdom of heaven, but he who does the will of My Father who is in heaven will enter. Many will say to Me on that day, ‘Lord, Lord, did we not prophesy in Your name, and in Your name cast out demons, and in Your name perform many miracles? And then I will declare to them, ‘I never knew you; depart from Me, you who practise lawlessness’ 17

Jesus wants to know us, and us to know Him, in a personal relationship that can only start when we accept Him as Lord of everything in our lives:

He came to His own, and those who were His own did not receive Him. But as many as received Him, to them He gave the right to become children of God, even to those who believe in His name.18

So, we are not saved by works, even good works such as partaking of communion which is simply to remember His good work which saves us.19 We are only saved by grace through faith“.

What Is Accomplished by Sacraments
Firstly, baptism (Gk; the processes of immersion, submersion and emergence. From bapto; “dip”20 Baptism is to humble us so it’s not only very dramatic way for us to commit ourselves to Him but also, when we are baptised for the right reason, it actually changes us inside. It makes us newly teachable:

Those who had acknowledged their need of forgiveness by being baptised were able to understand what Jesus was teaching; those who hadn’t, weren’t.

I therefore hope that anyone reading this who has not yet been baptised as a conscious choice will get someone to baptise them as soon as possible.

Secondly, communion. Communion is to do for us exactly what Jesus said, “Do this in remembrance of Me”– it’s to provide a frequent reminder of His death for us until he comes.22 This also helps to humble us as we remember it was our sins that made it necessary.

This means that we should only be baptised after we believe,23 baptism and the consumption of sanctified bread and wine are wonderful but not essential to salvation (great news for the thief on the cross and for the Salvation Army!). It also means the sacraments are liberated, back into the hands of every saint, the royal priesthood, and we can wear our own clothes.

So, what does God want us to do? Next we’ll look at who can offer the sacraments and how…