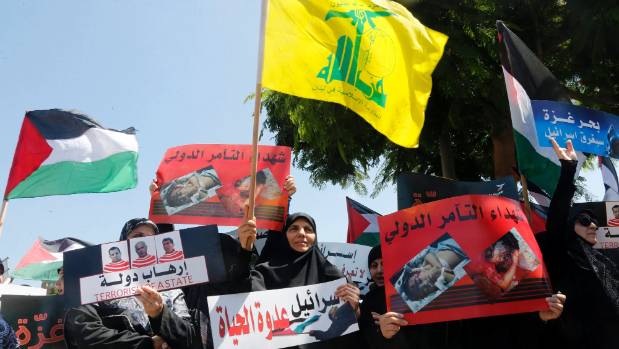 REUTERS: Lebanon’s Hezbollah supporters hold banners and wave Hezbollah, centre, and Palestinian flags, left, during a demonstration against Israel’s military action in Gaza, in front of the United Nations headquarters in Beirut.
OPINION: The current publicity about the centenaries of the Balfour Declaration (Paul Moon’s Changing history with one small statement, Oct 31) and the Battle of Beersheba is an imagined projection of an Israeli present into the historical past.

The Balfour Declaration was a British promise about the fate of a real place called Palestine.

Beersheba was the site of a battle between two empires, the British and the Ottoman Turks.

It was in that same real place called Palestine. Israel would not emerge to replace Palestine for another 30 years.

In the Balfour Declaration, the indigenous Palestinian inhabitants, the 92 per cent of the people who were Muslims and Christians, were promised some rights.

But the British gave the remaining eight per cent of the population, comprising mostly recent Jewish migrants from Europe, the first edition of an expanding Zionist licence to eventually expel most of these indigenous inhabitants. Israel was to be created on the land ethnically cleansed and left vacant.

British Foreign Secretary Arthur Balfour himself gives the lie to Paul Moon’s statement that Balfour was morally motivated. At least moral in the terms we understand today.

Balfour wrote to Lord Curzon, a later Foreign Secretary who believed his predecessor’s gift to European Jewry was fundamentally unjust: “In Palestine we do not propose even to go through the form of consulting the wishes of the present inhabitants of the country … The Four Great Powers are committed to Zionism. And Zionism, be it right or wrong, good or bad, is rooted in age-long traditions, in present need, in future hopes, of far profounder import than the desires and prejudices of the 700,000 Arabs who now inhabit that ancient land.”

In the right old imperial tradition, Balfour was romantically, yet expediently, dishing over to European Jews the right to displace Palestinians in Palestine. The hand-out was a local side-show to a secret British and French pact. Once they had wrested the greater region from Turkish control, Britain and France would divide it between themselves.

The British High Commissioner in Cairo had secured Arab support in the war effort. He promised the Arabs independence once the Turks were defeated. The Arab armies were whitewashed both out of history and the Beersheba commemoration.

The New Zealand and Australian soldiers at Beersheba were not fighting to bring Zionism to Palestine, despite what Israeli Prime Minister Netanyahu told our governor-general and everyone ignorant enough to believe it.

Paul Moon might like to call them “obstinate” but not surprisingly the Palestinians thought they were entitled to this independence. They objected to being displaced and then expelled by people arriving from Europe. The Palestinians’ fault was not buying into the narrative that ancient history gave Jews an exclusive right to rule Palestine and rename it Israel.

Palestine was the dumping-ground for Europe’s rampant anti-Semitism, which culminated in the horrors of the Holocaust.

The down-the-chain victims were the Palestinians. In 1947, Palestine was partitioned and the Balfour Declaration implemented as intended. Most of Palestine was given to the immigrant Jewish population, who were a minority even in their new state.

Neighbouring Arab states did indeed invade in support of the Palestinians, as Paul Moon so keenly points out. By this time, he omits to mention, the Israeli forces had already deeply invaded the area designated for the Palestinian majority. To fix the demographic problem the Israel forces were driving hundreds of thousands of Palestinians ahead of them into exile. This was Israel’s Plan Dalet.

Thus was created the largest refugee population in the world as a permanent entity (curiously Te Papa’s extensive refugee exhibit doesn’t mention them).

Even apartheid South Africa, the world’s other immigrant ethno-obsessed state of modern times, never tried expulsion on this scale.

Paul Moon may describe the modern-day Israel, that the millions of refugees are banned from returning to, as an “egalitarian and liberal democracy”. Democracy for some is no democracy at all.

The besieged Palestinian refugees of crowded Gaza, including those driven from Beersheba, are regularly bombed by Israel. They impertinently claim a right of return.

The Palestinians of the illegally walled-in and occupied West Bank and East Jerusalem endure seeing their homes systematically demolished to make way for equally illegal Jewish-only settlements. In 2006 they were allowed to vote for a Palestinian government. But Israel cancelled the result.

The Jewish settlers enjoy the right to vote in the Israeli Parliament. There is no suggestion the Palestinians in the same areas will achieve the same right even after fifty years of belligerent occupation by Israel – nor conversely of getting an Israeli withdrawal.

For the Palestinian minority in Israel, living under no fewer than 50 articles of legalised discrimination, there is only the democracy of an always restricted and increasingly threatened group in the Israeli parliament.

There is nothing to celebrate in the hundred years since the Balfour Declaration. And the gallantry and promise of liberation at Beersheba equally has become a betrayal.

Serena Moran is a member of the Wellington Palestine Group.