For years we heard this verse quoted to show we should not speak against our church leaders, that it was a sin to not support them – to question their leading was to question God! I knew this didn’t make sense when I first heard it because I had friends in cults like the Children of God and Witness Lee’s so-called ‘Local Church’ while some were Mormons, Christadelphians, and Jehovah’s Witnesses – if God was to forbid them questioning their leaders’ leadings, they would be forever trapped. And, of course, Jesus told us, “See to it that no-one misleads you”. That’s a command.

So what does the verse mean?

While it is, of course, always good to respect our leaders in our churches, our society, and our nation, even when they are blatantly wrong, no leader is ever to be beyond questioning and disobeying and this verse actually proves it because it means the exact opposite of what was preached to us.

Look for yourself at the context of this verse and let it speak for itself. Ask yourself as you read, who is God talking about and to? In Psalm 105, the psalmist is relating Israel’s history:

12 When they were only a few men in number, very few, and strangers in it.

13 And they wandered about from nation to nation, from one kingdom to another people.

14 He permitted no man to oppress them, and He reproved kings for their sakes:

15 “Do not touch My anointed ones, and do My prophets no harm.”

Who are ‘they’ (v. 12)? The nation of Israel, from the time of Abraham, Isaac, and Jacob until the Exodus and possession of the Promised Land – the people through whom God wanted to display Himself and His workings to the rest of the world.

Which ‘man’ and ‘kings’ did He restrain and reprove (v. 14)? We know God commanded the corrupt Balaam to bless and not curse Israel;1 He reproved Balak, king of Moab,2 and judged five kings of Midian.3

In other words, instead of the people of God being told, “Do not touch My leaders”, God was telling leaders, “Be careful how you treat My people”! Or, “You, the rest of the world, do not touch My anointed and do My prophets no harm because they are to teach you about Me and how to live”.  Those who take this portion of the Psalm as applying only to church leaders are grossly misinterpreting Scripture; if they are church leaders, they may need to reconsider how they’re treating His people.

Gordon Fee tells us in his book, How To Read the Bible For All It’s Worth,  to always keep these points in mind:

Let’s imitate the Bereans,4 listening eagerly and studying the Bible to check if what we’re hearing is correct. Our spiritual growth depends on us practising how to discern good teaching from bad.5 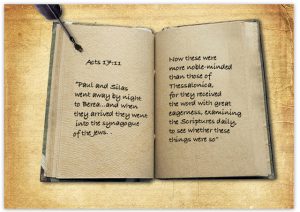