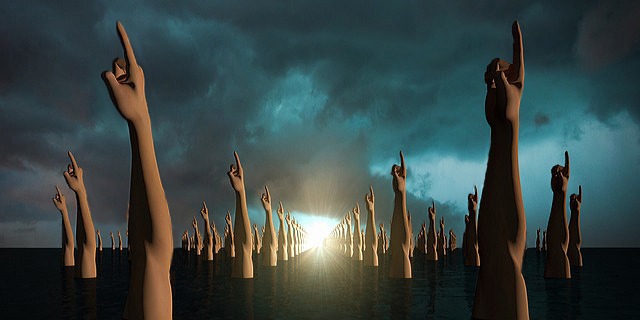 As we saw at the beginning, ‘authority’ has two very different meanings. It can mean either an expert on a particular subject or ‘the right to enforce obedience; delegated power’.1 One attempt at justifying Christian leaders exercising authority draws on the latter, that of ‘delegated power’. We also saw Watchman Nee’s ideas on this from his often quoted book, Spiritual Authority:

He should have said, as Jesus did, there is to be no authority in the church, other than over demons and sicknesses. We have to learn His ways because they’re higher than ours.3

People will perhaps argue, ‘What if the authority is wrong?’ The answer is, if God dares to entrust His authority to men, then we can dare to obey. Whether the one in authority is right or wrong does not concern us, since he has to be responsible directly to God. The obedient needs only to obey….  Insubordination, however, is rebellion, and for this the one under authority must answer to God.4

This is plainly nonsense because it dooms every member of a cult to remain in bondage and Jesus expressly forbids us to be misled by anyone, in authority or not. However, since this book was compiled from notes made by Watchman Nee’s students from lectures in 1948, it is possible he was misunderstood or misquoted. The book, however, continues to be widely referred to as definitive and is based entirely on the principle of ‘delegated authority’:

… all authorities (in the world, in the family, in the church) are delegated by Him and represent His authority.5

Notice the two premises of this required obedience: ‘if God dares to entrust His authority to men’, and since this delegation is to national and family leaders in the natural realm, He must have also delegated it to church leaders in the spiritual realm over other adult believers.

This fallacy comes from forgetting the essential difference between the natural and spiritual realms. It is half right, so people believe it, but equally, it is half wrong so they are hurt by it. And no wonder! The working tools given to ‘delegated authorities’ to enforce obedience are supposed to be painful when used properly. How much more painful when used improperly or inaccurately and by the unauthorised!

Consider the working tools of authority:

In delegating authority to governments over their citizens to uphold justice on the earth, God has placed in their hands ‘the sword’,6 the power of life and death, as the last resort to enforce obedience. In delegating authority to parents over their children, He gives them, as their last resort enforcement equipment, ‘the rod’ to punish.7 I won’t argue here with our N.Z. government making it a crime for parents to ever use a rod to correct a child,8 other to note this law emphasises the point that it’s painful. Since the authority being delegated is in the natural or physical realm, the enforcement equipment is natural or physical. However, both the sword and the rod have a spiritual counterpart. Neither of these are, or ever can be, given over to men to wield as they think best, even with the finest of intentions.

There is a play on the words here, the Hebrew for ‘almond’ being shaqed and ‘watching over’ being shoqed, which reveals that when God is trying to discipline us, as our King or Father, He firstly speaks to us. If we don’t listen to Him when He speaks gently, His words may become severe, as we saw earlier – His words become either a rod to punish or a sword as He seeks to ‘put our flesh to death’.11 If we won’t hear His words, God may then apply another kind of spiritual rod and sword i.e. increasingly adverse natural circumstances such as wars, plagues, droughts, and famines. Biblically, these are described as ‘the rod’12 and ‘the sword’.13

It was prophesied of Messiah that He will come to judge the earth on behalf of ‘the poor’ and ‘the afflicted of the earth’ using both rod and sword:

He will strike the earth with the rod of His mouth, and with the breath of His lips He will slay the wicked.14

John likewise describes Jesus returning to judge the world and bearing both the rod and the sword:

From His mouth comes a sharp sword, so that with it He may smite the nations; and He will rule them with a rod of iron.15

What then is our part? To leave the rod and the sword with Jesus. It is when we try to use the spiritual rod and sword without the Spirit’s leading that things go so horribly wrong. Haven’t we seen enough in our own experience, or in Satan’s Scripture-quoting,16 or in the seven sons of Sceva who tried to drive out demons in Jesus’ name?17

“I have hewn them [Israel] in pieces by the prophets; I have slain them by the words of My mouth”18

Here the spiritual sword was wielded as ‘the prophets’ prophesied. However, God used the literal sword in the hands of pagan Gentile armies to deal with the wicked of Israel.19

WHOSE THEN IS THE ‘SPIRITUAL AUTHORITY’?
Have the Gentile nations bearing that sword of the Lord become the ‘spiritual authority’ over Israel? Or have the adverse circumstances, the wars, droughts, or plagues, since they are applying the rod, become the ‘spiritual fathers’ of Israel? Of course not. The sword and the rod clearly remain God’s and are His prerogative or exclusive right as the King and the Father over the people of Israel. 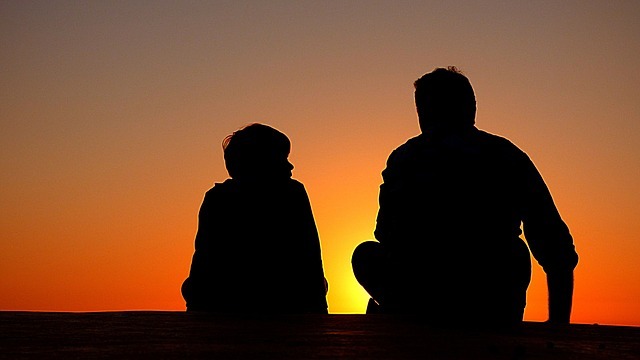 All spiritual authority is God’s and remains His. It is not handed over, or delegated, to anyone except the Son who is Himself God. The sword of the government of God never leaves His hand, since even when it is in the mouth of men, it is ‘the sword of the Spirit‘20 and is only effective when wielded by the Spirit. The rod of the Father also remains firmly in His hand. Just as naturalfathers disciplined us in natural behaviour, God Himself monitors our spiritual behaviour:

Shall we not much rather be subject to the Father of our spirits, and live? For they [our earthly fathers] disciplined us for a short time as seemed best to them, but He disciplines us for our good, that we may share His holiness.21

WHY THE CONFUSION?
In the spiritual realm, as we saw earlier, leaders are to lead by ‘speaking the word of God’.22 At times we have to speak words through which God exercises His authority. Some have mistakenly thought that God was thereby delegating it to us, for us to use on each other, but Jesus said it all very plainly:

“All authority has been given to Me in heaven and on earth. Go therefore and make disciples of all the nations…, teaching them to observe all that I commanded you; and lo, I am with you always, even to the end of the age.”23

All authority is and always remains His. He did not say, “and I give it to you so you can rule over them”. He was saying, “so you bring them to Me to be My obedient disciples”. He did not say, “Too bad I’ve died and cannot have any direct effect from here”. He was saying, “and remember, I am always going to be with you, the only King in this kingdom”. The identity of the only true spiritual Authority should never be in doubt.

ONLY ONE KING, ONE FATHER
Another way of illustrating this is the alternative term, ‘Lord’. We may like to entertain ideas in our churches of ruling over each other or being kings but would we even consider saying to each other, “I am your Lord”? And yet the concepts are interchangeable. We don’t, because we all know:

For us there is but one God, the Father,… and one Lord, Jesus Christ.24

Jesus is Lord and no godly leader would knowingly lay claim to that, yet many do so unknowingly by claiming to be a spiritual authority or by “ruling”.

As for ‘spiritual fathers’, Jesus commanded us:

“Do not call anyone on earth your father; for One is your Father, He who is in heaven.”25

Some have misunderstood Paul’s and John’s references to themselves as ‘fathers’ with children ‘in the faith’, as if they were claiming the position of fatherly authority but this Jewish metaphor is better understood by looking other examples in context. For example, does Satan’s being ‘the father of lies’26 mean he has authority over lies? No, it means he is the originator of them? Does our being ‘children of light’27 refer to our being under light’s authority? No, but that we are to be like light.

An examination of all the relevant Scriptures28 shows they were actually exhorting those so addressed to further imitate those who first led them to faith. For example, look again at one of the most misquoted passages to justify this understanding:

I admonish you as my beloved children. For if you were to have countless tutors in Christ, yet you would not have many fathers; for in Christ Jesus I became your father through the gospel.29 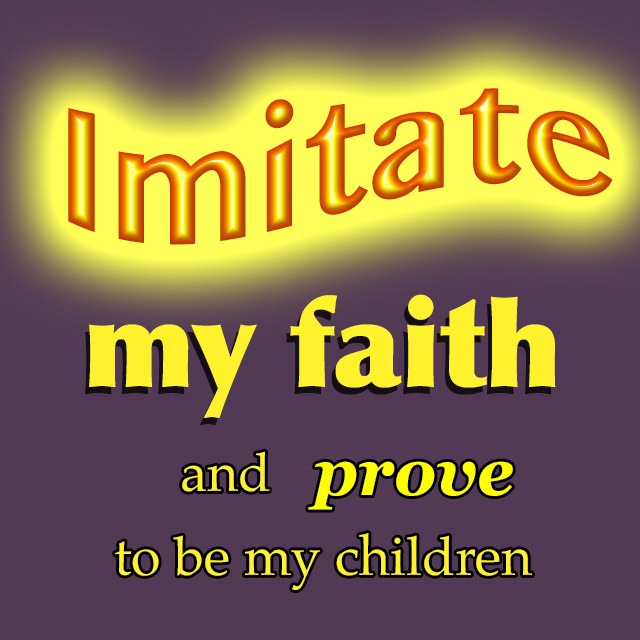 Paul’s application of this truth in the next verse is completely ignored:

Therefore I exhort you, be imitators of me.30

He does not claim authority as a ‘spiritual father by commanding them, but ‘exhorts’ his hearers to prove to be his ‘children’ by imitating him. In the same way we are all children of Abraham not by being under Abraham’s authority but by imitating him in having the same kind of faith as he had.31

TEACHERS TOO
Teachers too can be thought to hold delegated spiritual authority as in the guru concept, that the primary way to hear God is through the teachings of a particular leader. This is taught in Hinduism as bhakti yoga, devotion to your guru, but sometimes also in the church. Paul had to rebuke the Corinthians for being:

To correct their natural claims of godly Christian leaders and teachers as their authority, Paul goes on to remind them of the spiritual perspective – that he and Apollos are only servants through whom they came to believe or trust in the true Lord and Foundation, Jesus Himself.33

As for you, the anointing which you received from Him abides in you, and you have no need for anyone to teach you; but as His anointing teaches you about all things, and is true and is not a lie, and just as it has taught you, you abide in Him.34

‘His anointing’, the indwelling Holy Spirit, is to “teach you all things”35 and “guide you into all truth”.36

Jesus therefore taught that the Spirit’s role as the Teacher is to be carefully guarded by Christian leaders:

Notice all three roles of the Godhead, the Spirit, the Father and the Son, can be mistakenly taken by careless Christian leaders.

SUMMARY
In summary, the doctrine and concept of delegated authority over other adult believers is:

(iii) dangerous in that it wrongly justifies leaders standing in places where only God Himself should be in the lives of true disciples because it usurps the roles of the Father, the Son, and the Holy Spirit.