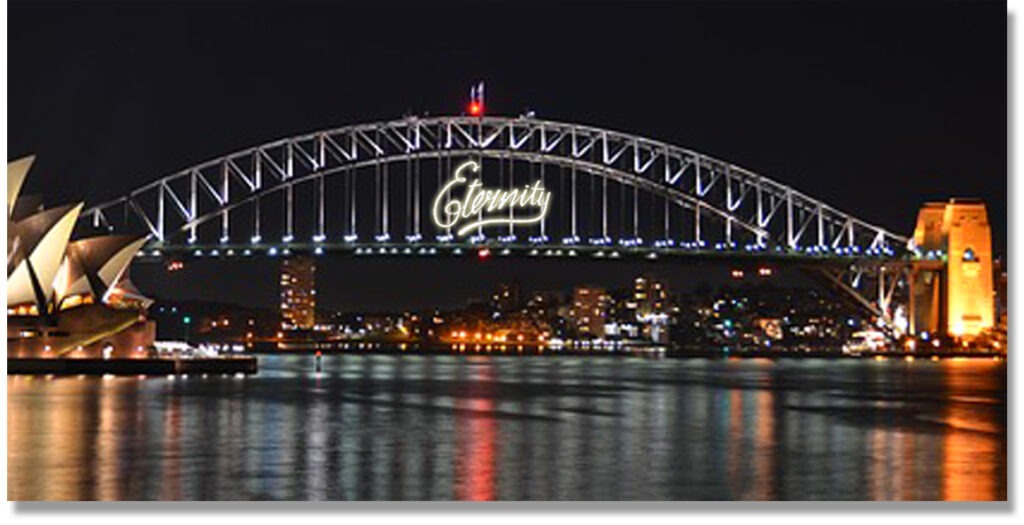 On New Year’s Eve in 1999, the city of Sydney celebrated the start of the new millennium by emblazoning “Eternity” across their iconic Harbour Bridge. It was a tribute to Arthur Stace, a reformed alcoholic, who had written this single word in beautiful copper-plate on the pavements of the city for thirty-five years to encourage his readers to think about where they were going. Like Arthur Stace, I want to encourage you to think about where you will be too.

Eternal life is in Jesus. It’s not about church or doing weird things, as I thought it would be, but about just one person – Jesus. He’s the key.

I met Him on 22nd August, 1972. In today’s language, I was a progressive liberal who passionately believed no one should be allowed to dictate to anyone what is right or wrong. I was staying with a group of lesbian friends and they were having a very painful argument because one of them had just been unfaithful. Listening to them, in my mind I stepped away to think and talk to Him. I’d heard about Him from other friends that we called ‘Jesus freaks’ and had been impressed by dramatic changes in them which gave me hope so I asked Him to be my Master too.

In that moment, I felt His presence and my life changed forever. A profound peace flooded me which I later saw described as “the peace that passes understanding”. I was so surprised I couldn’t even tell them in case they thought I’d lost my mind. I was amazed that He’d responded and that I’d somehow found my way “home” – that’s how it felt, that I’d finally come home to where I’d always wanted to be.

Why is eternal life in Jesus? We’ve all lied, stolen, been immoral, cheated in something, or worse, haven’t we? So the only way to God is via forgiveness. He’s really honest and He wants us to become like Jesus. And He is wonderful so what have we got to lose, except our baggage? We have to stop running and hiding, be honest about anything and everything we’ve done wrong, and ask Him to forgive us. Secondly, we have to take Him at His word, to trust Him when He says that Jesus paid the penalty for all of our wrongdoing when He died in our place. I didn’t understand that until later – all I knew at the time was that I needed help, and badly.

Jesus compares us to a closed room with Him standing outside and He says:

“Behold, I stand at the door and knock; if anyone hears My voice and opens the door, I will come in to him and will dine with him, and he with Me.”2

If you ask Him to enter, He will. He actually did for me. Pray/talk to Him now, wherever you are – ask Him to teach you, to change anything He wants to change. You’ll love what He does.

Eternal life is for anyone who will ‘receive’ or accept Him into their lives. As it says, when Jesus came to Israel in the 1st Century:

He came to His own, and those who were His own did not receive Him. But as many as received Him, to them He gave the right to become children of God, even to those who believe in His name.3

But let’s be absolutely clear:

Please accept God’s wonderful gift! If you have any questions, please just ask me. Like Arthur Stace, I love to talk about Him and what He’s done for me. If you don’t know how to pray, try this:

Jesus, I don’t know how to pray but You and I know I’ve done wrong [insert here any that particularly worry you]. I’m willing to believe Your message that You died in my place for what I’ve done. Please forgive me and help me to put anything right that I need to. I open the door of my heart – please come in now and be my God. Amen