Propitiation
What’s propitiation? It’s one big word but well worth understanding because it perfectly explains why Jesus died and why we need Him.

There’s a lot of confusion today about this. William Paul Young, for example, author of popular Christian novel The Shack, writes in his non-fiction work, Lies We Believe About God, that one lie is that ‘the cross was God’s idea’, leading us to wrongly believe…

it was God who killed Jesus, slaughtering Him as a necessary appeasement for His bloodthirsty need for justice.1

Another lie, he says, is that…

because of sin, God required child sacrifice to appease a sense of righteous indignation and the fury of holiness—Jesus being the ultimate child sacrifice.2

He rejects these as painting God as a ‘cosmic abuser’, adding:

Frankly, it is often this very cruel and monstrous god that the atheist refuses to acknowledge or grant credibility in any sense. And rightly so. Better no god at all, than this one.3 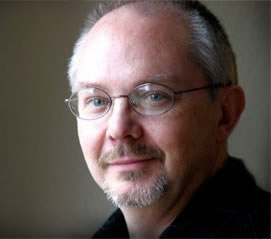 Some, including me initially, have rushed to condemn Mr Young’s theology because we missed what he was saying about crucifixion, that this was invented by men as ‘a means to torture human being in the most painful and abhorrent manner’.4. He’s actually right about that much. While God did institute the death penalty in the Noahic Covenant,5 He nowhere called for it to be prolonged and humiliating torture. The first historical record of crucifixion, according to Encyclopaedia Britannica, is of the Persian emperor, Darius I, crucifying 3,000 political opponents in Babylon in 519 BC, confirming Ezra’s record of Darius ordering that wrong-doers be impaled on a beam.6 However, the Persians may have adopted this from the Assyrians of the 8th Century BC,  renowned for their cruelty to defeated foes. Either way, it was man and not God who invented crucifixion.

God did foresee it though. In an astonishing prophecy dated to about 1000 BC, David predicted that Messiah would have His hands and His feet pierced by Gentiles, urged on by Jewish leaders.7 I aim to detail this in another article soon.

Returning to William Paul Young, he’s also right, as are atheists and Christians, to reject any idea of God being a bloodthirsty tyrant or child-abuser. I well understand his concern because when I was an atheist, I used to argue with Christian friends that I would never want to be a child of God because of what He did to His Son. However, when I eventually called on Jesus and He answered me, I finally grasped that the Son is not some hapless secondary being but the Father taking on flesh and blood8 and that ‘God was in Christ reconciling the world to Himself’.9

Jesus is Our Propitiation 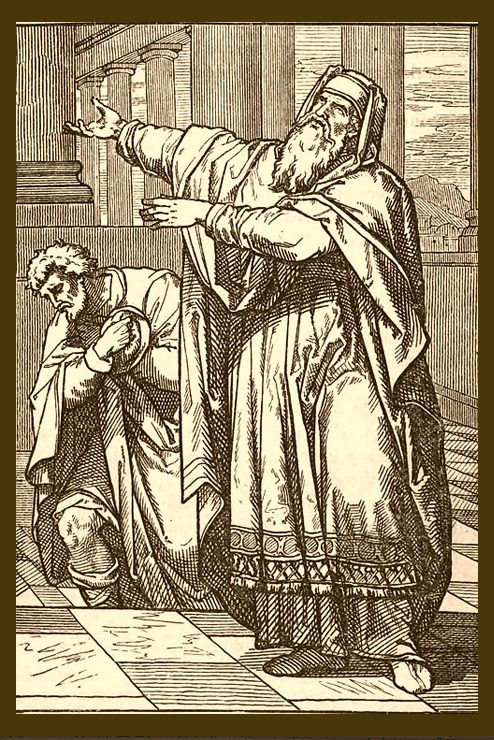 Jesus is described as our propitiation10 and as making propitiation,11 so let’s be clear what this means. To help us, Jesus told a parable, comparing a self-righteous Pharisee with a tax collector, much-hated among the Jew because they were collaborating with the Roman occupation:

Two men who went up to the Temple to pray,  one a Pharisee and the other a tax collector. The Pharisee stood and was praying to himself, ‘God, I thank you that I am not like other people: swindlers, unjust, adulterers, or even like this tax collector. I fast two days a week, and I give you one tenth of all my income.’  But the tax collector, standing some distance away, would not even raise his face to heaven, but beat on his breast, saying, ‘God, be merciful [lit. propitious] to me, the sinner!’  I tell you, this man went home justified rather than the other…12

The Pharisee listed all his good behaviours and was rejected by God; the hated tax collector asked God to be propitious to him as a sinner and went home ‘justified’. Justified means to be declared righteous, i.e. put right, and therefore restored to God. Propitiation is the means of restoring us to God by making us just, or righteous.

However, propitiation is not only to satisfy God’s requirement that we be perfectly just but it is also to show us that He is just:

…God displayed Him [Jesus] publicly as a propitiation in His blood through faith. This was to demonstrate His righteousness…13

How did this Jewish tax collector know he needed God to be propitious towards him? Because it was demonstrated in the most important part of the most important object in all of Jewish history – the golden lid of the Ark of the Covenant – which was kept in the heart of the holiest structures in Israel – the Holy of Holies.

The Golden Lid
When Paul wrote the above verse, he used a very particular word:

…God displayed Him [Jesus] publicly as a propitiation [Grk. hilasterion] in His blood through faith. This was to demonstrate His righteousness… 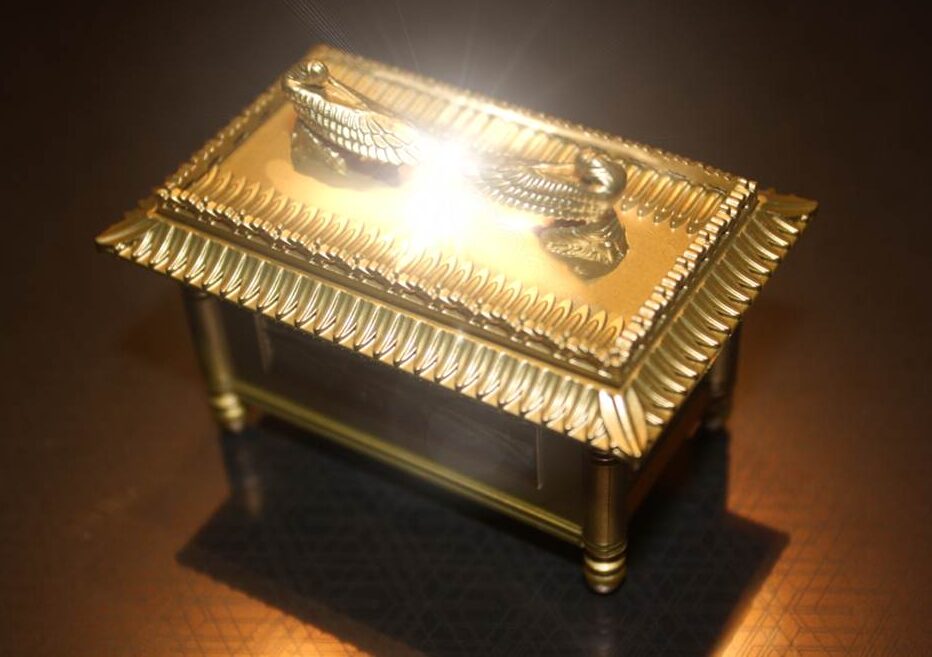 This Greek word, hilasterion, is used in the Septuagint translation of the Hebrew Bible to name the golden lid of the ark in Exodus 25:17 (Heb. kapporet). Following William Tyndale’s lead in the 16th Century, our English translations have usually called this ‘the mercy seat’; the NIV refers to the ‘atonement cover’.

Notice then what Paul is saying – the ‘mercy seat’, the golden lid of the ark, symbolises Jesus. The lid was the most important part of the Ark of the Covenant: the Holy of Holies itself was described as ‘the room for the mercy seat’;14 ‘the cherubim of glory overshadowed the mercy seat’.15

Paul also draws our attention to the very public nature of the Crucifixion:

…God displayed Him [Jesus] publicly as a propitiation in His blood through faith. This was to demonstrate His righteousness…

Compare His public execution with Israel’s High Priest only seeing the lid once a year on the Day of Atonement. God wanted to demonstrate to everyone that He is perfectly just. Reading on:

for the demonstration, I say, of His righteousness at the present time, so that He would be just and the justifier of the one who has faith in Jesus. 16

God is perfectly just and He can make us just, perfectly innocent. Or as Derek Prince used to say, justified means ‘just-as-if-I’d’ never sinned! So… what satisfies His requirement that we be perfectly just, according to Romans 3:25?

…God displayed [Jesus] publicly as a propitiation in His blood through faith.

Answer: our ‘faith’ in ‘His blood’ shed on our behalf. This is why Paul also wrote, ‘I determined to know nothing among you except Jesus Christ, and Him crucified’.17

Personal Application
Our hearts are the new Holy of Holies: 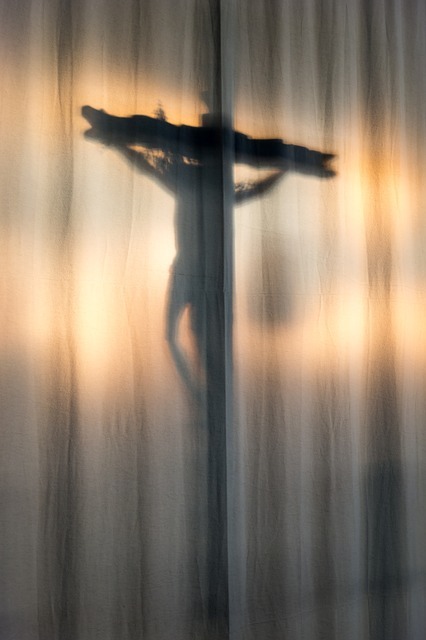 Therefore, brethren, since we have confidence to enter the holy place by the blood of Jesus, by a new and living way which He inaugurated for us through the veil, that is, His flesh, and since we have a great high priest over the house of God, let us draw near with a sincere heart in full assurance of faith, having our hearts sprinkled clean from an evil conscience and our bodies washed with pure water.18

This means that when anyone of us asks Jesus to enter us, our physical bodies, by the Holy Spirit, He enters our own Holy of Holies because we are each temples. Once there, He sprinkles our conscience with His blood. He lives and remains within us as our Great High Priest, ever interceding for us.

Differing Atonement Theories
Another term for propitiation is ‘atonement’, an English word generated by joining ‘at-one’ to ‘ment’, i.e. the means by which we can be ‘at one’ or reconciled to God. Over the last 2,000 years, our mostly Gentile churches have often focussed on just one aspect of what Jesus did and emphasised it as if it was the most important, as William Paul Young illustrates.

These differing views include: ransom-to-Satan (in which Jesus paid off our debt to Satan); Christus Victor (which emphasises Jesus victory over Satan and the powers); penal substitution (that Jesus was punished in our place); moral government (in which Jesus’ death was not in our place but to reveal God’s hatred of sin); moral influence (in which Jesus’ willingness to die softens our hearts).

Obviously, Jesus is victorious, was punished in our place, reveals God’s hatred of sin, and softens our hearts but the ransom-to-Satan idea was a simple misunderstanding of the ransom metaphor.19 Bizarrely, it was widely believed and debated by Gentile church ‘Fathers’ and leaders for almost a thousand years but the Early Church, taught by the Twelve and other Jewish leaders, would never have headed off on this tangent. They learned instead from God’s revelation of atonement/propitiation as revealed annually on Yom Kippur, the Day of Atonement, to every Jew for the previous 1,500 years. We know the Gentiles in Rome learned of this from Paul, as explained above, from what he called the great Jewish advantage.20

Summary
There’s no need for any confusion as to why Jesus died and why we need Him – even an irreligious tax collector could understand that we all, every single one of us, need God to be propitious towards us. He is that in Jesus and nowhere else:

So, propitiation… one big word that’s really worth knowing. I hope it’s as delightful to you as it is to me.