Gotta Serve Somebody: The Mystery of the Marks & 666
Confused about ‘The Mark of the Beast’? If so, you’re not alone – the mark and the number 666 have been controversial for centuries. Scholars and laymen alike have offered numerous interpretations, ‘calculations’ and wild guesses but while most predictions have failed to materialize, some say we just have to wait.

In this book, Graeme uses the keys recovered in the first two in this series (Dancing in the Dragon’s Jaws and Slouching Towards Bethlehem) to unlock the symbols and ‘times’ of the most infamous and misunderstood mark in human history.

Instead of waiting for a world government and/or global banking system that may never eventuate, Graeme believes and shows that The Mark is already here — and has been for the last 2,000 years! We’ve just not recognised it.

Digging into the Law of Moses, we find that this mark is actually the beast’s counterpart of marks that God Himself placed 3,500 years ago on the forehead and hand of His people, at the Exodus and in the wilderness, with a numbering system of names as described in the Book of Numbers. Graeme then shows how we have also been hampered by a simple mistranslation of Matthew 18:22.

We don’t need a profound theological education or esoteric enlightenment but we do need a basic grasp of Jewish history and the Old Testament, as already understood by 1st Century Jewish believers in Jesus of Nazareth.

Contents
20th Century Thinking – Predicted Technology?
The Marks of God – Bearing His Name
Six Marks, Four Texts – and Phylacteries
Forehead & Hand – Eating and Honouring
The Last Two – Loving & Avoiding
Marks of Satan – Bearing His Name
Able to Buy and Sell – And Much More
The Number of His Name – Todays’ Calculations
“Here is Wisdom…” – Anyone Can Do It
The Number of Man – One or Any
The 144,000 – Literal or Metaphorical
Building a City – Living Stones

About the Author
From the beginning of his ministry on the streets of Christchurch in 1973, Graeme was confronted by the multitude of ideas and beliefs held by sects, cults and orthodox churches. This kept him focused on how to understand the Scriptures while working for seven years as an interdenominational evangelist followed by 15 years as an elder and teacher.
After a brief spell in Nepal with INF (International Nepal Fellowship) and in Colorado with YWAM (Youth With A Mission) Graeme returned to New Zealand where he served as a Baptist minister for seven years. He is now an itinerant teacher and author. 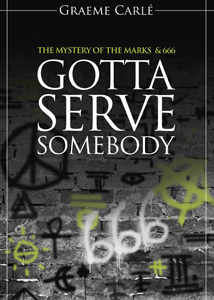 You're viewing: Gotta Serve Somebody $20.00
Add to cart