Postage: We post within New Zealand. For international orders, scroll down to order through outlets or contact us for postage costs.

Dancing in the Dragon’s Jaws, Slouching Towards Bethlehem, Gotta Serve Somebody and Silencing the Witnesses are: The Revelation Series. These books take a very different metaphorical approach showing how Johns visions would have been understood by 1st century Jewish believers and how they are profoundly relevant for us today.

See the individual book pages for a more detailed description.

From the beginning of his ministry on the streets of Christchurch in 1973, Graeme was confronted by the multitude of ideas and beliefs held by sects, cults and orthodox churches. This kept him focused on how to understand the Scriptures while working for seven years as an interdenominational evangelist followed by 15 years as an elder and teacher.
After a brief spell in Nepal with INF (International Nepal Fellowship) and in Colorado with YWAM (Youth With A Mission) Graeme returned to New Zealand where he served as a Baptist minister for seven years. He is now an itinerant teacher and author. 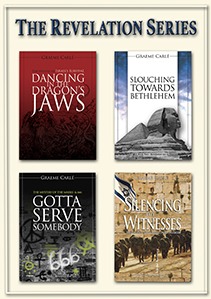 You're viewing: The Revelation Series $70.00
Add to cart