Silencing the Witnesses: Jerusalem & the Ascent of Secularism
Moses and Elijah back from the dead? The most popular interpretation of Revelation 11 today is literal – Moses and Elijah are soon to reappear in the streets of Jerusalem, preach for three and a half years, be killed by a metaphorical beast, i.e. a man called the Antichrist, and be resurrected again after three and a half days.

The most common academic view today, however, is that these are all metaphorical images, referring to the church being persecuted initially by the Romans, today by the whole world, but ultimately vindicated.

In this book, Graeme takes the metaphorical approach but from a Jewish perspective. The Early Church was, after all, led by Jewish disciples and/or Gentiles taught by Jewish disciples. He shows how the two witnesses would have been understood by John’s 1st Century audience to be the Law and the Prophets, making essential connections with Jesus’ parable of the rich man and Lazarus, and with Paul’s two Jerusalems in Galatians 4.

In doing so, Graeme surveys the effects of the Law over 3,500 years of Jewish history, how it still applies to every Jew not under the New Covenant, and how it is relevant for all of us today.

About the Author
From the beginning of his ministry on the streets of Christchurch in 1973, Graeme was confronted by the multitude of ideas and beliefs held by sects, cults and orthodox churches. This kept him focused on how to understand the Scriptures while working for seven years as an interdenominational evangelist followed by 15 years as an elder and teacher.

After a brief spell in Nepal with INF (International Nepal Fellowship) and in Colorado with YWAM (Youth With A Mission) Graeme returned to New Zealand where he served as a Baptist minister for seven years. He is now an itinerant teacher and author. 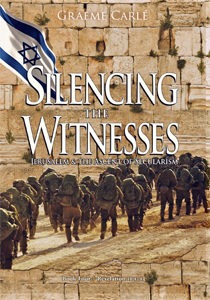 You're viewing: Silencing the Witnesses $20.00
Add to cart